After two days racing, De Felice (Under 17) and Krasowski (Under 13) still in commanding leads. 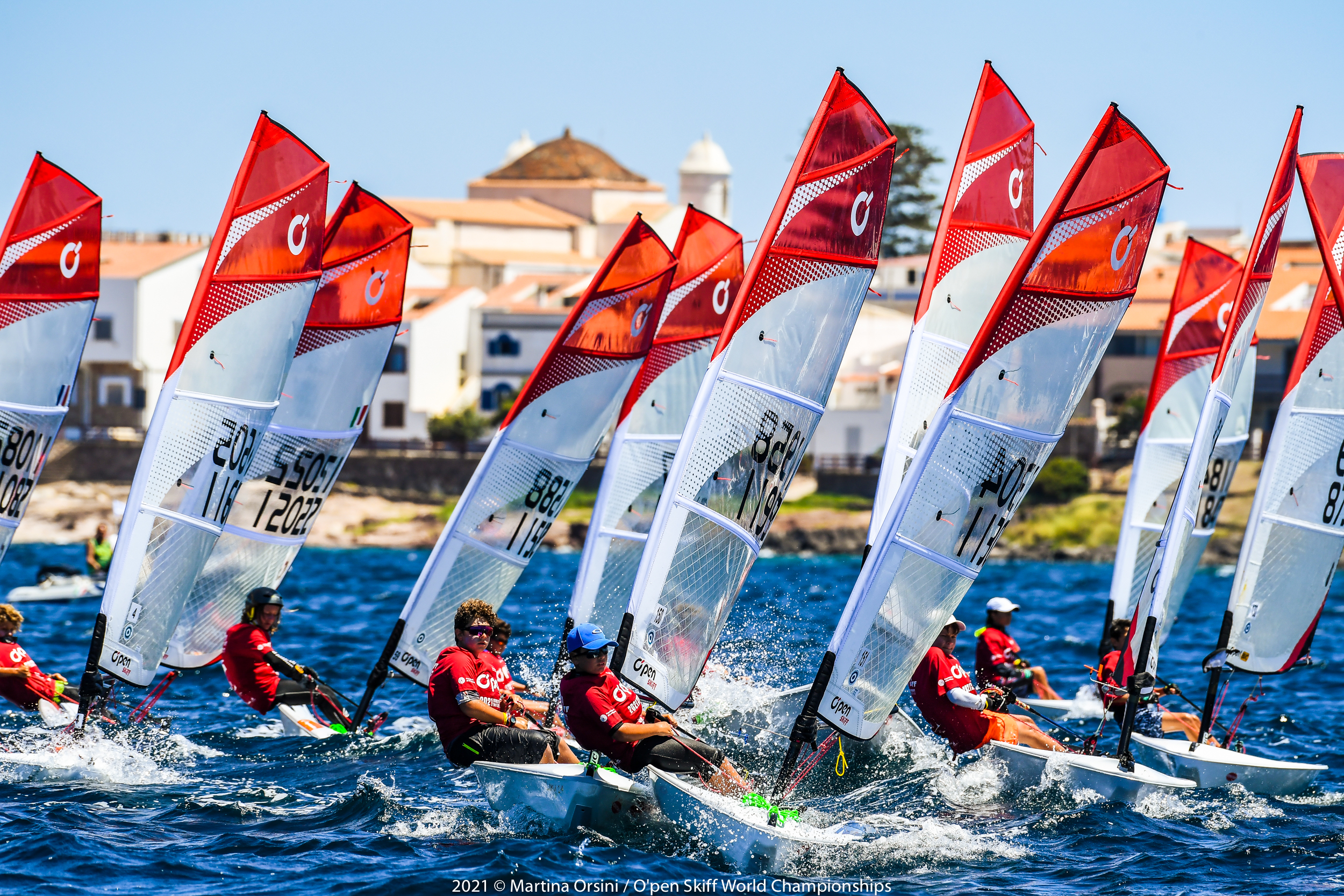 Calasetta, 15th July 2021 – The O’pen Skiff World Championships reached the halfway point. Today, blessed by another end-of-Mistral wind that peaked at around 15 knots, the second day of the scheduled four (following Tuesday’s excessive-wind blank) moved both fleets onward towards the final rankings that will decide the new O’pen Skiff World Champions in the Under 13 and Under 17 categories.

With another day of near-perfect conditions the race committee, chaired by Gianluca Fantini, decided to repeat the previous day’s action-packed programme. There were some minor tweaks to the course design for both fleets compared to the previous day, with a “classic” upwind/downwind configuration bringing the racers back for a finish in front of the watching crowds at the lovely spot at Sottotore beach, just north of the port of Sulcis.

This is the third time the World Championships has visited Italy and, as on Tuesday, conditions were good enough to allow another four rounds of racing, bringing the total to eight and allowing all the rsailors the opportunity of another worst-score discard.

The U17s were first onto the water again, for two rounds of very nervy racing leading to the races required before the fleet would be cut in half, the top 66 going forward to form the Gold Fleet, competing for the official World Championship podium honours, and the bottom 65 forming the Silver Fleet, competing for pride rather than prizes.
The competition was understandably nervous and tight, but with no change or threat to the overnight leader, Italy’s Manuel De Felice (CN Monte di Procida). He didn’t miss a beat, racking up four back-to-back race wins to give him a firm grip on top spot with an incredibly low score of 7 points. And there’s a real prospect of an all-Italy podium, with the consistent Alessandro Guernieri (Circolo della Vela Arco, 17 points) lying second, five points clear of Lorenzo Ceriello (CN Monte di Procida, 22).

“Today went very well all things considered” said a very satisfied U17 competition leader, Manuel De Felice from Procida/Italy, “I managed some good results, the race course was very difficult and the opponents were really strong. Now we’re into the Gold Fleet contest, the forecast is for conditions I really like and at this point in the competition I hope to stay ahead “.

“These have been two great days for me, I’m having a lot of fun” was the view of U13 leader, Poland’s Josef Krasowski. He too has tightened his grip on the rankings, having already won the International Calasetta Cup, the event’s opening “warm-up” contest, on the opening day. “Like in the warm-up race, the wind was as good as I’ve ever had, I can only be happy with how things have gone”.

First race time for today is 11.00am.
For both fleets, the race committee plans to complete another series of four races.