On the fourth, penultimate day of competition, there were two more races for the Under 13s and four for the Under 17s
Calasetta, 16th July 2021 – The tug-of- war with the Mistral wind continued here at the O’pen Skiff World Championship. 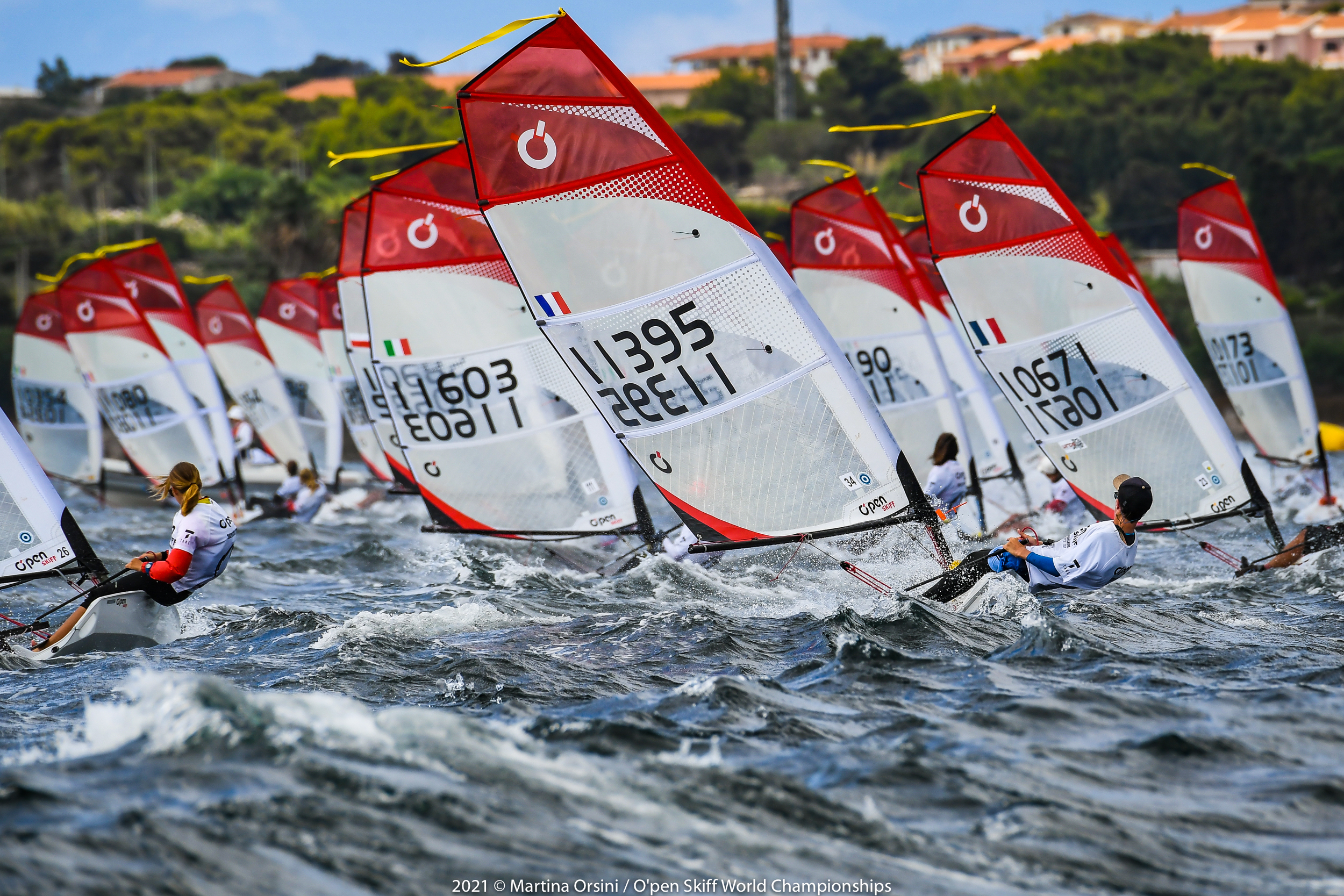 Today is the grand finale, the last chance for glory and podium places for the Under 13 and Under 17 World Champion titles. But even, with the denouement fast approaching, the sea at Calasetta was still being battered by regular big gusts from the north west, as it has been so often during this week of intense racing.
The strengthening wind forced the U13 fleet off the water after two more rounds. But the U17 fleet, now in Gold and Silver divisions were physically better able to handle the conditions and managed to stay out for four more rounds with white foam ripples visible across the whole bay.

Faced with a forecast for a rapidly strengthening Mistral, the Race Committee sensibly moved the race location to the beach at Cussorgia, much more sheltered and protected than the spot at Sottotore, which had been the venue for the first two days of competition.

Aware that conditions were likely to worsen during the day, making it difficult for the younger competitors, for once it was the U13s who got the racing started as they were sent out to get the action underway while conditions were still manageable. Afterwards, the U17s hit the water in two groups, first the Gold Fleet (the top 66 competing for the podium places) followed by the Silver Fleet, all watched by and appreciative and enthusiastic crowd of spectators on the sand-whipped beach.

In the Under 17s, the conditions were tricky even for the most experienced helmsmen. Nevertheless, Gold and Silver fleets both managed four more rounds of racing taking them to twelve rounds overall, and giving them all the chance of a second lowest-score discard once the ninth round had been completed.

In the Gold Fleet, Italy’s Manuel De Felice (CN Monte di Procida) continued his command of the racing and rankings, and is now in touching distance of the coveted World Champion title. His thirty point lead makes him virtually unbeatable, whatever the final day brings, and the prospect of an Italy 1-2-3 is very possible with the other podium spots currently filled by Leonardo Nonnis (Italian Naval League Sulcis, 45 points) just ahead of Alessandro Guernieri (Sailing Club Ondabuena Taranto, 50 points).

In the U13s the two more completed rounds of racing had absolutely zero effect on the top three places in the rankings. As he has been from day one, Poland’s Josef Krasowski (Sail & Ski Klub Warszawa, 10 points) further extended his lead and is comfortably ahead of Italy’s Matteo Attolico (Italian Naval League Procida, 29) and Juan De Nardo (CN Monte di Procida, 39), second and third respectively, going into the final day.

” I’m ready for the final challenge, it will be tough but I will play every card I have” said Leonardo Nonnis (LNI Sulcis), currently second-placed in the Under 17 category. “This is my local spot, but tomorrow it will be skill more than local knowledge that will be decisive. I need to try and attack De Felice but also watch my back for any movement by my opponents. It’s been a great race experience with so many talented skippers out there”.

“A wonderful experience for all our sailors”, that’s the verdict of Hungarian team coach Gergely Gathy , “we faced a long journey to be here, and it’s been a very formative week, not least because our sailors are more used to lake sailing and have had to learn fast how to deal with heavy sea and a strong gusty wind”

Today, the final day of the championship, racing has to start by 3pm latest to be able to finish in the time available.