Turquoise water at the Open Skiff EUROCHALLENGE in Palermo

The O’pen SKIFF Eurochallenge is a mini-tour criss-crossing the European continent, giving young sailors the chance to measure their skills at an international level.

The 2019 Eurochallenge started today, in Palermo, Sicily, an idyllic Mediterranean island location, popular with all varieties of wind and water sports fanatics. The other rounds will take place later in the season, at Sopot, Poland, and then finishing at Mandelieu on the Cote d’Azur in the south of France, a range of different conditions that will test the youngsters to their limits in pursuit of the Eurochallenge title. With the O’pen SKIFF World Championships having already taken place, in New Zealand at the turn of the year, and and the summer in Europe still to come the Eurochallenge is a great opportunity to get back into serious international action.

For the record, day 1 of the Eurochallenge, at the Vela Club Palermo with its exquisite turquoise water, was raced in mainly light but sailable winds. With their knowledge of the site and the conditions it was obvious that home sailors would dominate day 1 proceedings, which they duly did after four rounds of racing. 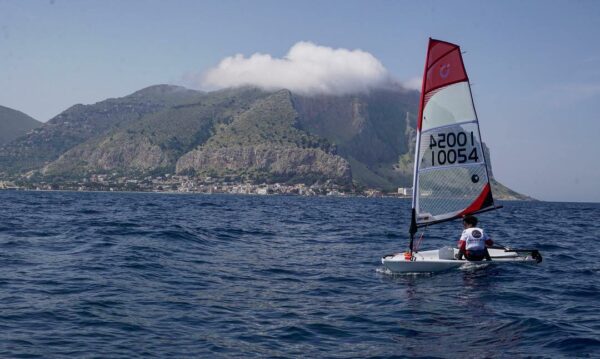 65 competitors have registered for this first Eurochallenge regatta, and in the U13 category it’s an Italian 1-2-3, Salvatore Mancino, Federico Quaranta, Luigi Veniero, all hunted by the highest placed girl, Sophie Macaluso. Up in the U17 category, similar story, Manuel de Felice and Lorenzon Mancino making it an Italy 1-2, with only San Marino’s Pietro Cardelli preventing another clean sweep.

It will take a lot to break the Italian dominance at this round, but others will try. That’s the great thing about the Eurochallenge, each round offers a different location and different conditions. Whoever claims the title will have earned it. Two more days to go in Palermo, two more rounds to follow.

You can keep up to date with the action and results from Palermo on the event/class website at: https://eurochallenge2019.openskiff.org